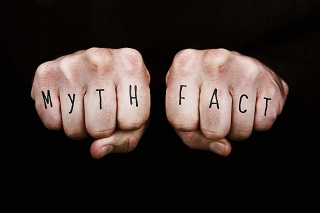 Myth 1: Victims Are “Asking for It” Based on Their Behavior

The idea that victims are the cause for an incident of sexual assault or harassment because of how they are dressed, how they are acting, or how much they are drinking is not true. Nobody anticipates or wants to be a victim of an attack, and they should not be required to change how they dress or act to avoid getting assaulted. Sexual assault is often about the attacker having a sense of control over their victims and is not the fault of the victim due to their behavior.

Myth 2: Only Women are Victims of Sexual Assault

The statement that men are never victims of sexual assault is simply not true. While the majority of attacks are against females, one out of sixteen men are also sexually assaulted in college. Overall, one in ten men are survivors of sexual assault. In addition,according to the National Intimate Partner and Sexual Violence Survey, 26% of gay men and 37% of bisexual men encounter incidents of sexual assault. These statistics prove that sexual assault can happen to anyone and does not discriminate based on race, culture or gender.

Myth 3: Being in a Relationship/Married Means You Consent To Sex

Consent is defined in the U.S. as sexual activity that is agreed upon by all parties before something happens. Consent can and should be both physical and verbal. Anyone has the right to withdraw consent at anytime during a sexual activity. This is also true of married couples and individuals in a relationship. RAINN reports that 25% of violent incidents are committed by a current or former spouse, boyfriend or girlfriend. Even if you are married or in a relationship, that does not entitle someone else to your body.

This statement is also false. In fact, seven out of ten incidents of sexual assault are committed by someone the survivor knows. This means that less than 30% are by a stranger. Additionally, this is also true on college campuses with students who are married, in a relationship, in class or is somehow acquainted with their attacker. An incident on one’s campus and committed by someone the survivor knows may be especially traumatic and distracting to studies. It is important to know that the school is available and ready to take care of both the survivor and the attacker if an incident does occur.

Myth 5: It’s Not Assault if You Are Drinking

Also wrong. Alcohol does not cause sexual assault, nor does it provide an excuse should an incident occur. However, alcohol can impair one’s judgment, which is why they are often associated with incidents on college campuses. An estimated one half of these incidents occur when alcohol is consumed by the perpetrator, survivor or both, according to the National Institute on Alcohol Abuse and Alcoholism. Additionally, most experts would say that the excessive consumption of alcohol negates the ability to give consent. It is important to know that there are steps that you can take to protect yourself and your friends when drinking. For example, it is important to always be aware of your surroundings, keep an eye on your drink and know your limits.

Myth 6: If You Report It, It May Impact Your Status

It is estimated that only 20% of female students report an attack and 42% of women do not tell anyone if they are assaulted. There are many reasons that students do not report an incident of sexual assault. However, international students may be concerned about filing a report because they are worried about the impact it may have on their immigration status. While international students should maintain a full course load, there are considerations if you receive approval through your Principal School Designated Official (PDSO). However, medical reasons only provide 12 months of academic relief. It is important to note that you are not required to disclose any information to receive approval on the grounds of academic or medical reasons.  As such, you are not required to tell your PDSO about an assault. If you do, though, your PDSO is required to report it to the proper authorities.

Sexual assault is difficult to talk about, but it is vital to be aware of the myths and facts around the topic. Keep in mind that your school is there to help you understand the facts and laws around sexual assault in the U.S. If an incident does occur, it is important to seek help and understand that it is never the fault of the survivor.

*These statistics are provided by RAINN. For more information, you may visit their website at: https://www.rainn.org/.

Jacqueline joined the EIC team in 2017. She has a BA in International Relations from Rollins College. Prior to joining EIC, she has worked in sales and the nonprofit sector. Her passion for international education led her to Envisage.