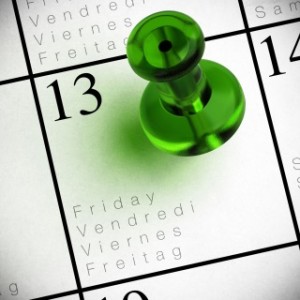 Though no one is quite sure of its origin, its impact is quite evident. Many people will purposely avoid doing anything significant—such as business meetings, socials, banquets, etc. — due to the belief that the day is cursed and will bring about ill fortune.

The idea of superstitious dates is not limited to the US, although the unlucky day varies according to different cultures. For example, in Italy it is not Friday the 13th, but Friday the 17th that is considered unlucky. In Italian culture, the number 17 is thought to be unlucky, because when it is viewed as the Roman numeral XVII, and then changed anagrammatically to VIXI, it reminds Italians of the Latin phrase meaning “I have lived,” the perfect tense implying “My life is over.”

Additionally, if Friday the 17th falls in November, that is considered to be the unluckiest day of all, because November 2 is memorial day to the deceased in Italy. When this occurs, November is referred to as “the month of the deceased.”

In Spanish speaking counries, it is not the date but the day that is different. Rather than Friday the 13th, Tuesday the 13th is traditionally unlucky. The Greeks also consider Tuesday (and especially the 13th) an unlucky day. The fall of Constantinople to the Fourth Crusade occurred on Tuesday, April 13, 1204, and the Fall of Constantinople to the Ottomans happened on Tuesday, May 29, 1453. Both events served to strengthen the superstition surrounding Tuesday. In addition, the name of the day in Greek is Triti (Τρίτη), meaning literally the third (day of the week). This adds weight to the superstition, as bad luck is said to come in threes.

In India, Friday the 13th is not considered to be unlucky, nor are there any superstitions connected to the number 13. However, Fridays in general are considered to be particularly auspicious days.

In case you were curious, the fear of Friday the 13th is called “friggatriskaidekaphobia” — try saying that five times fast!

Jennifer is the International Director at International Student Insurance. Jennifer is a graduate of the University of Florida where she holds a Masters in International Business and a Bachelors of Science in Business Administration. She has lived and worked abroad in Mexico, Chile, Costa Rica and England, and traveled extensively in South America, Europe and Asia.